An Interview with our Inspectors

We hope you enjoy this insightful interview, which looks at a ‘day in the life’ of an RSPCA Inspector.
For more on our staff, insights into different roles across the Society, and monthly news/events updates, please get in touch and let us know that you’d like to subscribe to our e-newsletter on enquiries@rspca-sunderland.org.uk.

In the meantime, here is our interview with Cathy and Rachael, Inspectors in the North East Region. 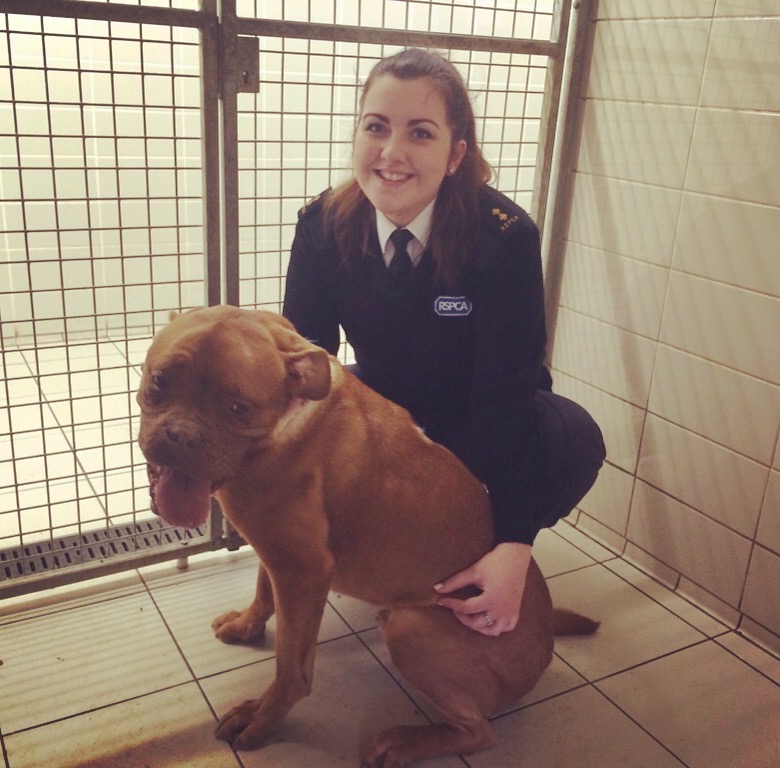 Pictured above – Left to right: Inspector Cathy with Hugo, and Inspector Rachael with a little lamb

What motivated you to work for the RSPCA?

We both grew up with animals at home and learned how to care for them from a young age. We are a similar age and grew up watching animal documentaries on TV and that’s where our passion for animals and animal welfare all started.

How long have you been working as an Inspector?

Cathy: I have been an Inspector for seven years now, and still no two days are the same, which is both amazing and very challenging.

Rachael: My journey with the RSPCA started when I worked as an Animal Care Assistant, before moving into a Supervisor’s role at the RSPCA’s Felledge Animal Centre. I graduated as an Inspector three years ago.

What is a typical day like in your role?

There is no such thing as a typical day. We really never know what to expect, which is why we are trained to deal with such a wide range of situations before we graduate. We work with a whole range of animals from scaly critters to farm animals and everything in between. Our group (the North East region) covers over 3000 square miles, which includes various sites, from big cities to rural farms. As well as attending to reports of cruelty, we also deal with injured animals (both wild and domestic) who can get themselves in some sticky situations. We have to be prepared for anything on a daily basis but that’s part of why we love our job.

What do you like most about being an Inspector?

We’d have to say that working with animals is probably the best part – it’s the reason we became part of the RSPCA. We also meet a huge range of people around the region in our work and it’s always nice to engage in conversations, especially where we are able to help people and to have a positive impact on animals and their owners.

In what ways is your role rewarding?

Seeing an improvement towards the welfare of an animal or animals as a result of our involvement, and feeling like we have made a difference. There’s nothing better than a happy ending.

In what ways is your role challenging?

We always do everything we can the animals in need of our help. But sometimes, no matter what we do, some animals don’t reach their happy ending – and that is always one of the hardest parts of the job. Due to the nature of our role, we can also encounter people experiencing stress and who, often, become defensive or abusive towards us. While this can be a very challenging part of the job, we always strive to show understanding and patience. Our ultimate goal is to help protect animals from harm in the most appropriate and effective way we can.

What’s your most memorable experience/memory form your time with the RSPCA?

We both meet hundreds of animals every month but, as you can imagine, there are some that leave a lasting impression.

Cathy: For me, it was a Dogue De Bordeuax named Hugo who stole my heart. I visited Hugo when I first became an Inspector and, by a twist of fate, our paths crossed again further down the line when I rescued him from deplorable living conditions. Despite his many health issues, Hugo was rehomed to a family who love him. He was such a character, and it was lovely to see his story end with him finding his forever home.

Rachael: For me, it is a German Shepherd named Isabell. I rescued Isabell along with a number of other animals from a private residence. Isabelle had awful wounds to her body and was so underweight that it was touch and go as to whether she would make it. Despite all of this, she is now almost fully recovered and will soon be looking for her forever home (which, would be with me if I didn’t have a house full already).

Is there any aspect of your role that people might be surprised to learn?

We generally work alone which, given the nature of the job, often comes as a surprise to many people. In the North East, there is a total of 14 inspectors. This includes both full and part time workers. Between the 14 of us, working various hours and shift patterns, we cover an area that stretches from Seaham/Murton all the way up to Scotland, and across to the Haltwhistle area, 24/7 365 days a year. Meaning that, even at full staff, each inspector would be covering 300+ square miles – alone.

Do you have a favourite animal/breed?

Cathy: It has to be bull breed dogs for me. For whatever reason, they tend to get a negative reputation and, sadly, are quite often the kind of dogs we find in situations needing our help. But I knows first-hand what loving dogs they actually are and they deserve loving homes, as all animals do.

Rachael: Having previously been a cattery supervisor it is, of course, the cats for me. It didn’t take long in the job for two of the cats I rescued to become permanent members of my family, one of which I raised from only a few days old.

What do you hope for the future in your role?

We hope that people can learn to be kinder towards animals and that we do not continue to see the level of cruelty that, sadly, there currently is in this region which, as it stands, is one of the worst areas in the country for cruelty and neglect.

We also hope, while we continue to fight for a world free of animal cruelty, that the brilliant support from members of the public, and our amazing volunteers; whether that be in reporting cruelty, or supporting the RSPCA as a whole, continues. It is truly invaluable towards the work we do for animals, every day.